The Blog of Barkley

Read the book, read the blog!

A fantastic read! Links to Amazon!

So President Intercepted decides to give Bob Dylan a Medal of Freedom.  And as appalled as I am about that because it cheapens that particular award forever, it is within his purview.  Additionally, putting it in the following context, it actually makes sense:

1)  Obama was really into pot in high school (aka choom in Hawaii).  To the point of thanking the 'Choom Gang' in his high school yearbook.  To developing new and novel ways of smoking dope, such as in a car with the windows up to maximize buzz.

2)  Obama was given a Nobel Peace Prize for doing absolutely nothing (and actually becoming one of the more war-mongering presidents, regardless of the international law he seeks to give sovereignty here in the US).  So after seeing one of the premier and (previously) most prestigious awards in the world come to naught, he has no real frame of reference.

Speaking of war-mongering, does anyone NOT think that he's kept Syria on hold, policy-wise, until just before the election in order to get a ratings-bounce??
Posted by Midwest Chick at 6:56 AM 3 comments: Links to this post

Via Drudge:  While giving the commencement address at the University of Virginia, Katie Couric whined "...You'll wonder, when will I be loved?" Now to my thinking, as one of the great unwashed, you have to be lovable in order to be loved. Ms. Couric has done absolutely nothing to garner a following (including referring to Americans living in the Heartland as the great unwashed). She seems to me to be an elitist snob who has pandered to the eliterati and has ignored the rest of us. You don't become 'America's Sweetheart' by referring to a trip to Chicago as 'touring the middle of the country' (maybe if she'd actually gone downstate or something, I dunno). Her distaste and disregard for the majority of Americans shines through everytime she tries to get 'in touch with the people'. So, if I were she, I wouldn't be holding my breath while waiting to be loved.
Posted by Midwest Chick at 6:08 PM 3 comments: Links to this post

The mighty and indomitable Og said in a posting today:


"NO life is lived in vain that was loved by a dog. No human ever had a more noble calling than to care for his four legged friend."

Thanks to everyone who has written, called, or texted with good wishes and understanding of what we're going through right now.  We're enjoying the time we have, spoiling her with treats, and doing what we should all do--treating every day as if it was our last.

The cats all seem to know that something is up and have been particularly loving also--to her and to us.  Anyone who doesn't think that these pure creatures have a soul, is sorely lacking one themselves.
Posted by Midwest Chick at 9:47 PM 4 comments: Links to this post

Something occurred to me today.  College degrees are the modern day equivalent of Patents of Nobility.  Sometimes they indicate quality, sometimes you might as well have hired a naked guy to write them up for you......  But either one is either trumped or enhanced by experience, knowledge, a will to learn, and heart.

So a Milford man has a stress test that includes a radioisotope and gets pulled over by the state police on his way home for 'driving while radioactive'.

The first thing that flashed into my head while reading the article was this scene from 'Repo Man'....

Posted by Midwest Chick at 8:33 AM 2 comments: Links to this post 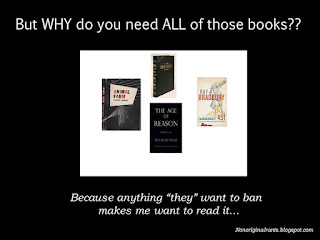 Posted by Midwest Chick at 9:34 PM 4 comments: Links to this post

Just gives me a feeling of pride that a man such as Col. West is on our side.  He knows his history and his look of incredulity was epic (the look that should be given to all stupid/disingenuous/leading questions).  Thought it was interesting that the CAIR shill started going on the 'you've attacked Islam' schtick not very far into his being schooled (some might say pwned) by Col. West.  Too good to not share...


Posted by Midwest Chick at 7:24 PM No comments: Links to this post

At which point she could bite me....

The defense counselor for Walid ben Attash, a POS who was involved in the bombing of the US Cole and was Bin Laden's 'errand boy' and was also one of the trainers of the 9/11 hijackers, appeared in court dressed in hijab and was insisting that the court ORDER the other women in the courtroom to do likewise.

I think this crazy woman forgets that she lives in the United States, where people can, to the best of my knowledge, choose for themselves what they are going to wear in the morning.  For myself, it'd be Ally McBeal short skirts, garters, and the highest heels I could walk in after something like that.  There is no way that I would dignify such a ludicrous request with anything other than an incredulous stare.  For a probable liberal, why WHY would someone acquiesce to a mode of dress that is designed to 'keep women in their place'.

My disgust knows no bounds....
Posted by Midwest Chick at 6:24 PM No comments: Links to this post

Quote of the Day on the Elizabeth Warren geneaology issue

One of the commentors on The Other McCain's blogpost regarding Elizabeth Warren and her 'Native American' ancestry said this:

Posted by Midwest Chick at 7:38 AM 2 comments: Links to this post

Legends of the Defrauders....

So Elizabeth Warren, based on a family legend, checked that 'Native American' box in professional directories and was touted by Harvard as part of their diversity structure in their law school.  I'm not a lawyer, I wasn't trained as one, but even I know there's this little thing called 'proof'.  In my family, there was also the legend of a dark-skinned great-great grandmother who would take her youngest child across the prairie to visit the 'tribe' for the summer.  And I believed it and re-told it.  I even went to Native American Pow-Wow's in search of documentation.

That side of the family doesn't live far from tribal lands in the Kansas/Oklahoma area and has been here so long that I could have a small constellation of stars (at least Cassiopeia) at the Daughters of the American Revolution.  So it's not inconceivable that at some point, they would have intermarried with the Native Americans in their area.  I don't know how to judge cheekbones, but they tend to the high side with those folks too.

But the big issue with the family legend, it was bushwah.  One of my uncles, who had considerable resources, tried to prove the family legend and couldn't.   There may have been a dark skinned great-great grandmother and she may have called herself Cherokee (that whole self-identification thing that Boston genealogists are trying to use to cover Warren's butt), but she might have been Greek or Jewish or Mexican or Hindu or African, for all we know--there are a lot of darker-skinned possibilities out there. But you know, as convinced I was of our heritage and the truth of the family legend, I didn't check that box because I didn't have proof.  It would have made things simpler, could have opened some doors, but without a piece of paper showing tribal membership, it wasn't going to happen.

Warren claims that she just wanted to make friends and she believed the stories because of her grandfather's "high cheekbones".  Reaaaaallllly.....   She has just proven that she's willing to exploit the status of a special class in order to get money, preferential treatment, and other perks that come with it (gee, maybe she is a natural for Congress).

I just think she's sad and pathetic and should go back to her teaching job and get out of politics.
Posted by Midwest Chick at 7:06 AM 1 comment: Links to this post